The romantic esoteric park designed by Michele Canzio in 1846

The entrance of this beautiful park is located close to the railway station in Genova Pegli, and is the same entrance of the Archeological Museum.
It is considered one of the major historical gardens in Europe, and also includes the botanical garden dedicated to the noblewoman Clelia Durazzo.
Villa and park in its present form dates back to the mid-nineteenth century, but the complex has its origins from an eighteenth-century villa palace of the Grimaldi family. Later there were also involved the families Pallavicini and Durazzo, all related to each other and all powerful.
It was conceived as a vast garden that climbs the hill in Pegli and at the same time as a theatrical plot, developed in three acts as a prequel and an exodus. It 's an amazing big "theater" outdoors.
Every act has four scenes, composed of architecture, furniture, streams, fountains, ponds and exotic or indigenous plants chosen for their compositional characteristics and evocative.
Nothing is left to chance and those who walk go from serene and luminous environments in shady and disturbing areas,with neoclassical scenes to medieval or exotic settings, experiencing the story that the architect Michele Canzio has created and which replays each time for visitors.
The plot takes as its subject the journey that a man does in his lifetime; a personal growth journey that leds him to investigate the relationship with his soul and to "watch" the world to the wonders that it is.
The visitor can turn into a spectator-actor of romantic plot. 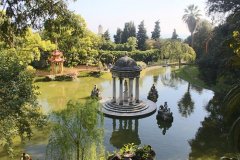 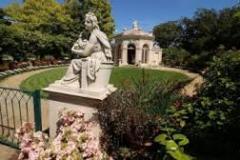 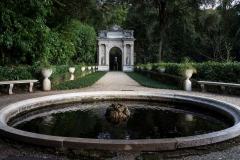